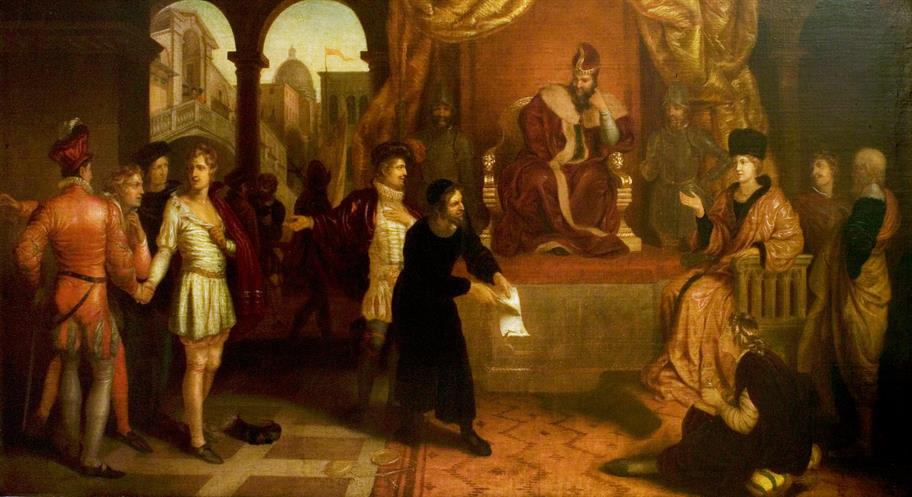 The Merchant of Venice is one of Shakespeare’s most popular romantic comedies, written sometime around 1956 and 1957. William Shakespeare is the greatest writer in the history of English language. He is one of the most brilliant playwrights in the world and England’s national poet. His genius as a playwright eclipses that of all others of his age. None approached the craft or the humanity of character that marks the Bard’s work.

He created the most vivid characters of the Elizabethan stage . The protagonists of the  play Merchant of Venice are definitely some of them. Romantic comedy was a popoular and much-preferred genre in Elizabethan theatre . All the trappings of such are present in Merchant of Venice. A romantic comedy is usually a light comic work whose plot focuses on the development of a romantic relationship. It is termed a comedy because it embodies a particular theme . ” No one dies and there is a happy ending to the play “. Though Merchant of Venice has some dark moments as it develops, there are humerous moments that intersperse the play. Albove all, Merchant of Venice is one of the most staged romantic comedies of Shakespeare . However forms one of a group of such comedies with ” The two Gentlemen of Verona”, ” As you like it ” and ” Twelfth Night “.

Merchant of Venice explores the theme of love, money, prejudice and social injustice. Bassanio, one of the male protagonists of the play wanted to marry a rich and beautiful woman called Portia . However , he did not have the means to pay for his travel to Belmont, to woo her. So he asked his closest friend Antonio if he could borrow some money from him. Antonio at that point, had no money to lend and so he asked Shylock . Shylock was one of the cruellest money lenders of Venice and Antonio’s sworn enemy . Shylock agreed but stated that if Antonio did not pay back on time, he must repay by giving a ” pound of his own flesh

“. On the other hand, Portia’s late father had set up a “lottery” in his will . Which meant that anyone who wanted to marry his daughter had to pass a test first. Several suitors came but none succeeded until Bassanio, who correctly chose the lead casket and won Portia’s hand in marriage. Meanwhile, Antonio’s ships were lost at sea and thus he had no way to repay Shylock . He wrote to Bassanio who immediately left Belmont with Portia’s money to save his friend from the clutches of Shylock. Portia too followed Bassanio but that was not known to anyone except her closest aid Nerissa. Portia disguised herself as a male lawyer and took over Antonio’s case in the Duke’s court. From then on, the play takes an unexpected turn and finally ends on a happy note.

POPULARITY OF MERCHANT OF VENICE :

The worldwide popularity of the Merchant of Venice and the fully booked performances at theatres all across the globe, seem to indicate that the theme of love, prejudice, greed, justice and mercy remain just as relevant to today’s audience, as they were to theatre goers in the Elizabethan age. The earliest performance of this play was held at the court of King James in the spring of 1605. Since then, the play has been made into  films several times, starting from the silent era and also in several languages.

The first ” big screen ” adaptation of the play was released in 2004, directed by Michael Radford with Al Pacino as Shylock. This film took further pains to show the sources of Shylock’s thirst for vengeance. There was also the BBC video taped television version for BBC’s play of the month series in 1972. There was another BBC broadcast on BBC Radio 3 in 2018. The play has also been successfully adapted as opera, quite a few times. Thus it can be said that, Merchant of Venice remains one of Shakespeare’s most enacted and most discussed plays of all time.