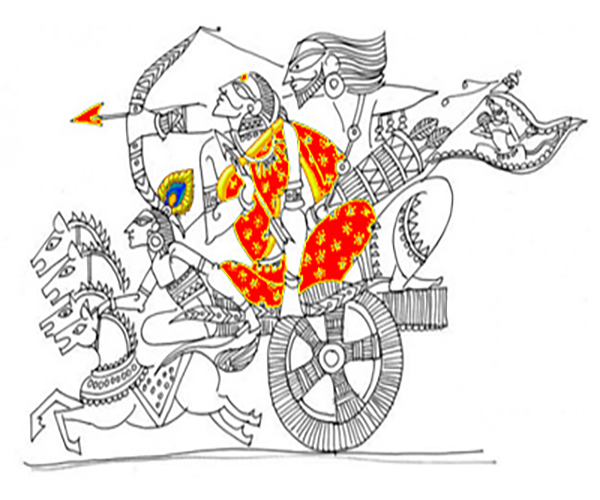 RAUDRA RASA IN THEATRE : ONE OF THE FUNDAMENTAL RASAS OF THE NATYA-SHASTRA

Rasa is defined as the agreeable quality of the emotional or aesthetic  impression of a work of art. Literally, the Sanskrit word “Rasa” means “essence, sap, juice or taste”. Rasa refers to an essential concept in Indian arts about the aesthetic flavor created by any form of visual, literary or musical works, that evokes an emotion or feeling in the audience or reader but cannot be described.

It is a kind of contemplative abstraction in which the inwardness of the human feelings suffuses the surrounding world. Basically, rasas are created by ” Bhavas” or the state of mind. Moreover The theory of Rasa is attributed to Bharata Muni . A sage-priest , He is thought to have lived sometime between the 1st century BCE and the 3rd century CE. It was later modified and developed by the rhetorician and philosopher Abhinava Gupta. He applied it to all varieties of theatre and poetry.

Accordingly, there are eight rasas in Natya Shastra. These are Sringara (romance, love) , Raudram (fury) , Hasyam ( laughter, mirth) , Karunyam ( compassion, mercy) , Bibhatsam ( Disgust, aversion) , Bhayanakam ( horror, terror ) , Veeram (heroism ) and Adbhutam (wonder, amazement ).
Raudra rasa refers to the “furious sentiment” used in dramatic performance. This is a fundamental and dominant rasa, as described in the Natya-Shastra. Basically, Raudram rasa is a disagreeable, destructive rasa while it has its use in communication. However The energy of anger expresses itself from  mild irritation up to real fury.

AN INSIGHT INTO USAGE OF RAUDRA RASA IN THEATRE

The presiding deity of Raudra rasa is Rudra and the colour associated with it is red. This rasa takes its origin in the Raksasas, Danavas and very haughty human beings with a regular battle as the immediate cause. The activities connected with raudra rasa are beating, tearing, harassing, chopping off, breaking, piercing, striking, hurling missiles, shedding blood, seizing of weapons and similar activities.

The presentation of Raudra rasa in the dramatic performance is through the ” Anubhavas “, such as making the eyes red, perspiring profusely, knitting of the eyebrows, clapping of the hands, biting of the lips, throbbing of the cheeks, hitting the palm with the fist, etc. Through the quality of Raudra used in their normal speech as well as action. However the love they showcase will manifest the anger they have subdued. For instance this will help the audience to immediately identify with the character and savour the rasa. Although Anger is one of the most basic human emotions . Moreover Raudra rasa is applied in dramas of all languages, all over  the world. In addition Raudra rasa in theatre is one of the most explored rasas of Natya Shastra. In conclusion Raudra Rasa is a fundamental rasa in theatre.