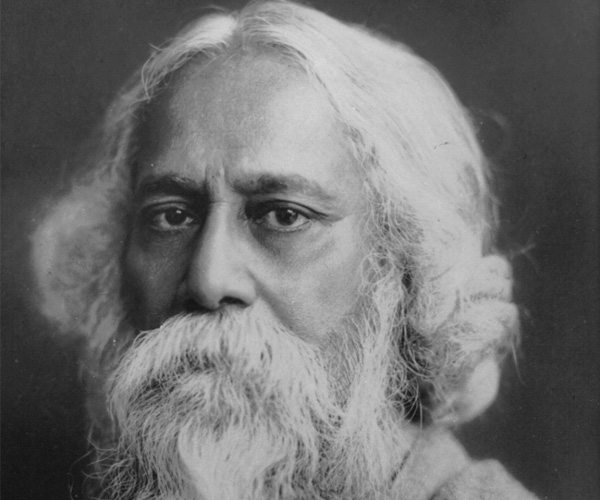 Born into the aristocratic and renowned Tagore family of Jorasanko, Rabindranath Tagore grew up in his sprawling ancestral home in an atmosphere of culture, active social life and surging nationalism. He was a versatile genius who excelled as a painter, a writer of short stories, novels, poems, plays and essays and as a composer of thousands of songs. He became the first non-westerner to win a Noble prize in 1913. Regarded as the ” Shakespeare of Bengal “, Tagore largely owed his success as a playwright to his predecessors and seniors, who were closely associated with Bengali theatre. Raktakarabi is one of the most complex and critically acclaimed play of Rabindranath Tagore . In fact, Bengali theatre, from its very origin, is largely indebted to this talented family of Bengal. There were several seniors in the family who took keen interest in theatre like Gyanendra Nath, Gunendra Nath, Dwijendra Nath, Jyotirindra Nath and many more. Jorasanko Theatre, which was formed in the ancestral home of Tagore family, witnessed the enactment of several successful plays. Thus, young Rabindranath grew up in this ambience and at the age of thirteen only, he translated Shakespeare’s Macbeth into Bengali. At twenty, he wrote his first drama-opera “Valmiki Pratibha”. Thus began Tagore’s journey as a playwright.

RAKTAKARABI : A PROTEST AGAINST MECHANICAL LIFE AND OPPRESSION

Raktakarabi is one of the most complex and critically acclaimed play of Rabindranath Tagore. This highly metaphorical work of Tagore was first given the title of ” Yakshapuri” but was later renamed as Raktakarabi, when it was published in periodical “Prabasi” in 1924. The play depicts how human greed denies the beauties and naturalness of life, making it a mere machine and a necessary ingredient for production, thus leading to human protest against such a state. The play takes place in a kingdom called ” Yakshapuri “, where the king resides behind an iron curtain and humanity has never set its foot there. People are forced to work in the gold mines so that the King can become wealthier and cruelty and death are delivered upon them, on the slightest pretext. And then comes Nandini, the female protagonist of Raktakarabi. Nandini ia nature unfettered, unspoilt. She is like a river in full flow. She chastises the king for hiding behind his enclosure. Nandini symbolises freedom, her sole ornament being her jewels crafted out of Red oleander ( Raktakarabi ), which she wears as a tribute to Ranjan, the man she loves. Through this drama, Tagore reveals layers of the constant repression of the weak by the powerful, of the captive by the captor, of the exploited by the exploiter and of the labour by the capitalist.

RAKTAKARABI : ONE OF THE MOST TALKED-ABOUT AND ENACTED PLAYS OF TAGORE

Though metaphorical and a little complex, Raktakarabi remaims one of the most popular dance dramas of Rabindranath Tagore. “Bohurupee”, the group of all time great Shambhu Mitra and Tripti Mitra, first staged the drama in 1954. Recently, Janhavi Center for Performing Arts staged Raktakarabi as a dance drama that combines Mime, Kathakali, Bharat-natyam, Masks, Installation and Folk forms. It has also been staged by Bratati Parampara, as a brain child of noted elocutionist Bratati Bandopadhyay. Raktakarabi has been performed in English as “Red oleander ” in London, by a new British theatre company. There are several other performances by various theatre groups. However, most popular among the current productions is the stage presentation of Raktakarabi by noted theatre personality, Goutam Haldar (2010).