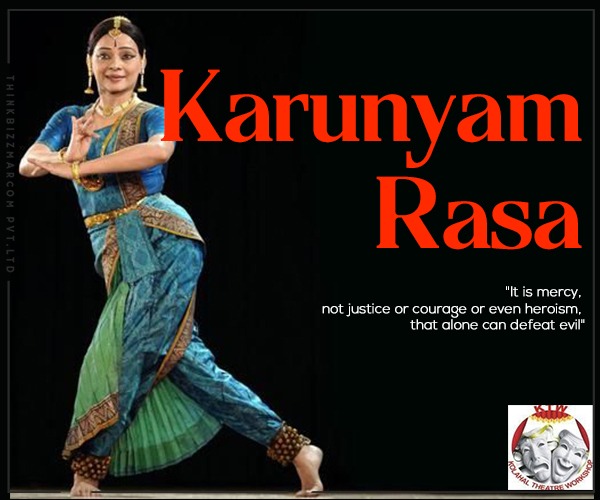 “It is mercy, not justice or courage or even heroism, that alone can defeat evil”. Of the various rasas or emotions depicted in drama, Karunyam rasa (compassion, mercy) is a predominant and commonly explored emotion. A rasa literally means “juice, essence or taste “. It connotes a concept of Indian arts about aesthetic flavor of any visual, literary or musical work that evokes an emotion or feeling in the reader or audience, but cannot be described in words. These rasas originate from bhavas, the state of mind. Bhava is a state or occurrence or appearance or condition from which the emotion is born.

Karunyam or karuna rasa represents emotions of sorrow and compassion. It is associated with the color grey and its presiding deity is Yama. While the highest karuna is compassion, the original Sanskrit word karuna means “sadness”. This more popular meaning of karuna rasa finds expression in different kinds of art form in India like literature, music, dance, theatre, etc.

KARUNYAM RASA : AS EXPLAINED IN THE RASA THEORY

The principal work of dramatic theory is Natya Shastra, a Sanskrit text on performing arts and this body of literature is attributed to Sage Bharata Muni ( a sage priest who is thought to have lived sometime between the 1st century BCE and 3rd century CE).

The Natya Shastra has a section dedicated to Rasa theory. According to Bharata Muni, the principal human feelings are delight, laughter, sorrow, anger, fear, disgust, heroism and astonishment.

The Eight Rasas In Natya Shastra

Karuna rasa is a very essential part of the Natya Shastra. The dominant emotion or sthayi bhava in Karuna rasa is soka or sorrow. The determinants of karuna rasa are curse, distress, downfall, calamity, loss of wealth, separation from near and dear ones, flight, misfortune, etc. Its presentation in the stage is achieved through the following expressions viz discharge of tears, lamentation, parched throat and mouth, pallor of the face, drooping of the limbs, gasping for breath, loss of memory and other similar things. Thus Karunyam rasa is a commonly explored emotion in theatre.

KARUNYAM RASA : THE SENTIMENT OF PATHOS

Karuna rasa or Karunyam rasa refers to the “pathetic sentiment” or the “sentiment of pathos “. It is the rasa of sadness, of which the highest form is compassion. Pity and sadness are born out of ignorance and attachments. While sadness is an ingredient of compassion, true compassion goes beyond sadness to an unending kindness that doesn’t taste like sadness at all. In case of true compassion, melancholy of sadness evaporates in love and truth.

The Natya Shastra states that the karuna rasa takes its origin through different bhavas either at the sight of the death (or murder) of the dear one or when unpleasant words have an adverse impact. It is to be presented in the stage through sighs, lamentations, loss of sense, weeping copiously and other similar gestures.

Since tragedy is a very common genre, there are innumerable dramas, written and enacted all over the world, whose main main theme needs depiction of karuna rasa. Besides, as sub-theme, karuna rasa is a very common emotion that is explored in dramatic performances. Because emotions like sorrow, mercy and compassion are part and parcel of our daily lives.