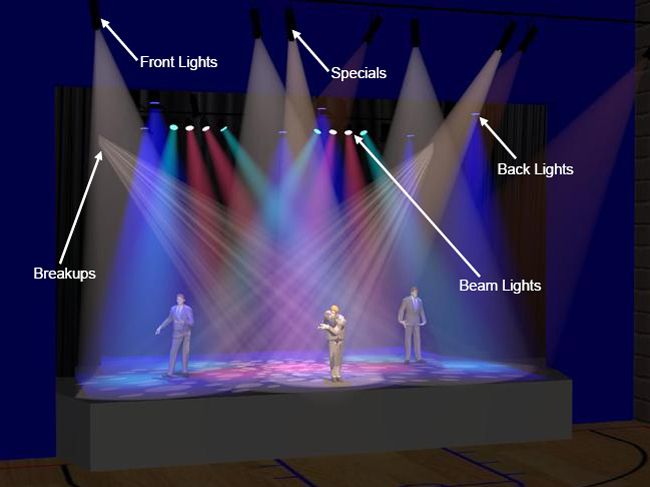 In theatre, or as a matter of fact any type of stage performance, lighting plays a pivotal role. Stage lighting is the craft of lighting as it applies to the production of theatre, dance, opera and other performance arts. The lighting designer is responsible for the design, installation and operation of the lighting and special electrical effects used in the production. Stage Lighting is an essential element in theatre performances. Several different types of stage lighting instruments are in use in this discipline. In addition to basic lighting, modern stage lighting can also include special effects such as lasers and fog machines. The theatrical lighting as we see today, has passed through several stages of evolution to reach its current state.

The earliest known form of stage lighting was during the early Grecian Theaters. The classic Greek Theatre was built in open air, on a hillside, so that the afternoon sunlight come from behind the audience and flood the performing area with light. The larger Roman theatres were also outdoors, but the added luxury of a colored awning stretched over the spectators, that softened the glare of the sun. Until the 16th century, the theatre is continuing to be mainly an outdoor institution. However, natural light continued to utilize when playhouses built with a large circular opening at the top of the theatre.

Early Modern English theatres were roofless, allowing natural light to utilize the stage for lighting. Stage Lighting is an essential element in theatre performances. As the theatres moved indoors, artificial lighting became a necessity and it kept developing with the advancement of theatre and technology. Candles started as a use in the court theatre of Italy in the late 1500s. Thousands of candles required to light a stage and were in chandeliers or footlights, where hundreds of candles would be on the edge of the stage to light faces. Gas light was revolutionary when it was first used in the theatres and was a fourth of the cost of candles or oil lamps. It was first introduced in 1815 at the Olympics Theatre. The intense white quality of the gas light called for the make up to  change.

Hence it in say that  the invention of gas lighting kick-started the modern idea of design that we think of today. In 1878, Joseph Swan introduced the world’s first incandescent electric lamp. Overtime, brighter and larger lights developed. With the invention of a lighting console, it became possible to store the lighting information. Thus it became more complex than just switching them on and off.  LED lights which started to become popular in 2007, can instantly change colors. Although more expensive, it allowed theatres to cut down on the amount of light needed. More recently, movable led lights are coming to the stages and they are even more effective.

Stage lighting has multiple functions some of which include –

This is the most basic function of lighting. It allows the viewers to see properly, what is occurring on stage.

Lighting directs the audience’s attention to an area of the stage or to distract them from another.

Lighting helps to set the tone of a scene. Harsh red light has a different effect than soft lavender light.

• Location and Time of the day

Lighting used to establish or alter position in time and space. Blues can suggest night time while orange can suggest a sunset.

Stage lighting used to show only those areas of the stage, which the lighting designer wants the audience to see, in order to ” paint a picture”