MAHABHARATA: THE EXTRAORDINARY TALE OF WISDOM 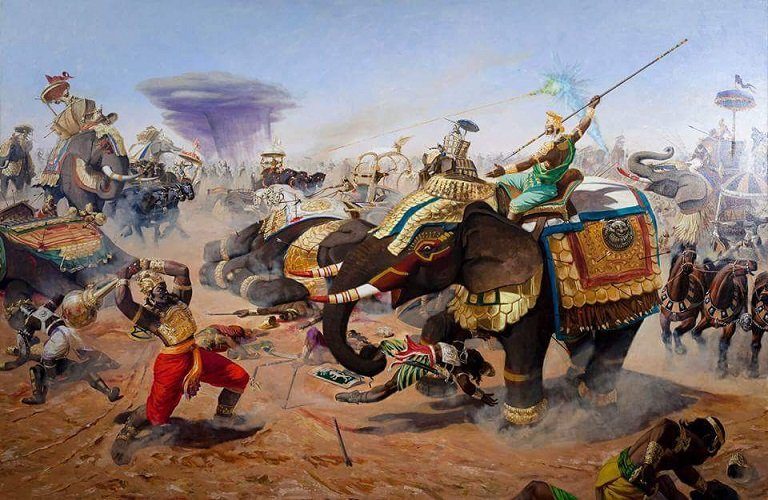 MAHABHARATA: THE EXTRAORDINARY TALE OF WISDOM

“He is a fool that practices truth without knowing the difference between truth and falsehood.” ~ Mahabharata .The Mahabharata is the extraordinary tale of wisdom. It is one of the two major Sanskrit epics of ancient India, the other being the Ramayana. The epic narrates the struggle between two groups of cousins, Kauravas and Pandavas, in the battle of Kurukshetra.. It is about seven times the length of the Iliad and Odyssey combined. The original events related by the epic probably fall between the 9th and 8th centuries BCE.

THE STORY IN NUT-SHELL :

The core story of Mahabharata is that of a dynastic struggle for the throne of mighty  Hastinapur, the kingdom ruled by the Kuru clan. The two collateral branches of the same family that participate in the struggle to proclaim the throne are the Kauravas and the Pandavas. Although the Kaurava was the senior branch of the family, Duryodhana who was the eldest Kaurava was younger than Yudhishthira, who was the eldest Pandava.

Both of them claim to be the first in line to inherit the throne. The continuous strife finally leads to the Great Battle of Kurukshetra, in which the Pandavas ensure victory, with the aid of Krishna. The battle produces complex conflicts of kinship and friendship, instances of family loyalty and duty taking precedence over what is right and vice versa. The Mahabharata itself ends with the death of Krishna and the subsequent end of his dynasty. It culminates with the ascent of Pandava brothers to the heaven and also marks the beginning of the Hindu age of Kaliyuga, the fourth and final age of Mankind. Thus, Mahabharata is the extraordinary tale of wisdom.

RELEVANCE OF MAHABHARATA IN TODAY’S WORLD :

Everything that has happened, is happening and will also happen in the future, is already covered in Mahabharata. Above all, the one reason which makes this epic more humane is that God has been brought as man’s level. Therefore the Mahabharata has greater scope for adaptation, variance and twist.

Scholars, intellectuals, politicians and also common men have made full use of this epic. As quoted by one of the scholars, ” The reason why all of us continue to identify with the Mahabharata even today is that the context may be different, the socio-economic milieu may be different, but the conflict of Dharma, the dilemma, the personal choices, the personal conflicts are that each one of us faces everyday.”

However, the characters and incidents which we come across in Mahabharata are universal and timeless. Firstly, in our society, clever politicians like Sri Krishna and evil conspirators like Shakuni exists. Secondly, family rivalry over properties leads to legal battles and unfair means to win the cases. Similarly, like Draupadi’s Vastraharan women are subjected to molestation and humiliation. Moreover, there are husbands like Yudhishthira who consider their wives as their personal properties. Unmarried mothers are afraid of infamy and scandal due to their illegitimate child. They are still often bound to abandon them like Kunti did with Karna.