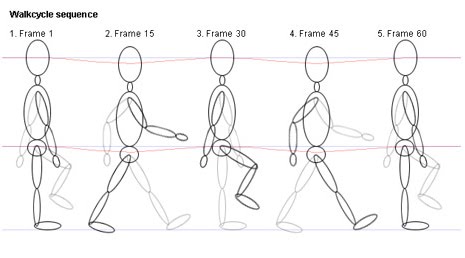 Animation is the art of drawing movements. It is a popular term in the world of entertainment. It is the method in which figures are manipulated to appear as moving images. Thus it is the art of making inanimate objects appear to move. Animation is an artistic impulse that predates in movies. In traditional animation, images are drawn or painted by hand on transparent celluloid sheets to be photographed and exhibited on film.

Today, most animations are made with computer-generated imagery  (CGI). Commonly, the effect of animation is achieved by a rapid succession of sequential images that minimally differ from each other. If drawings of the stages of an action were shown in fast succession, the human eye perceive them as a continuous movement. History’s first recorded animator was Pygmalion of Greek and Roman mythology, a sculptor who created a figure of a woman so ravishing that he himself fell in love with her and begged Goddess Venus to bring her to life.

The journey of animation started much earlier before the development of cinematography. The physical movement of image parts through simple mechanisms like moving images in Magic lantern shows, can also be considered as animation. These shows projected images on a screen, moving as the result of manipulation by hand and/or minor mechanics.

In 1838, the Stroboscopic disc (also known as Phenakistiscope) introduced the Stroboscopic principles of modern animation, which later also provided the basis for cinematography. The rise of the cinematic industry also developed several animation techniques. Such happened between 1895 and 1920. However, the predominant technique throughout most of the 20th century was Hand-Drawn animations. Traditional animation is another name to it.

Felix the cat, who debuted in 1919 became the first animated superstar

In 1928, “Steamboat Willie” featuring Mickey Mouse and Minnie Mouse, was a popularized film with synchronized sound. Therefore it put Walt Disney’s studio at the forefront of the animation industry. Around the turn of the millennium, computer animation became the dominant animation technique in most regions. Besides it proved cheaper and more profitable. Computers generated the 3D animation style and also provided the charming characteristics of cell animation. Thus discovery of more and more digital tools helped developing new styles and effects.

ANIMATION AS A PROFESSION :

Animators are specializes artists in creating animations. Animation is a satisfying and lucrative profession thus it attracts a large number of youngsters today. In spite of the recent global economic crises, animation industry has continued to grow at a rapid pace. In India too, despite the late start, the animation Industry is on the path of expansion. Henceforth, it is sure to experience a prolonged period of boom. Thus animation giants like Disney and other will supply the outsourcing of animation project work. However, one can become a successful animator with oodles of creativity and proper qualification in this field. Thus animation is the art of drawing movements.

–Traditional Animation– This is one of the oldest forms of animation in film. In traditional animation, objects are drawn on celluloid transparent paper. In order to create the animated sequence, the animator must draw every frame.

-2D Animation-2D animation can fall under traditional animation like most early Disney movies — Pinocchio, Beauty and the Beast, etc. However, vector based animation controls the motion here rather using pixels.

-3D Animation– In 3D animated movies, the animator uses a program to move the character’s body parts around. They set their digital frames when all of the parts of the character are in the right position. They do this for each frame, and the computer calculates the motion from each frame. Animators adjust and tweak the curvatures and movements their characters make throughout. From Toy Story in 1995 to today’s Coco, 3D animation has become the dominant style in animated films.

-Motion Graphics-Graphics that create the illusion of motion usually for ads, title sequences in films, but ultimately exist to communicate something to the viewer. Used mostly in business, usually with text as a main player

-Stop Motion–Stop motion encompasses cartoon animation, pixelation, object-motion and also cut out animation. But the basic mechanics are similar to the traditional style like a flipbook. However, instead of drawings, stop motion adjusts physical objects in each frame.  Whether puppets, clay, or even real people, these manual adjustments can make it a long, arduous process.