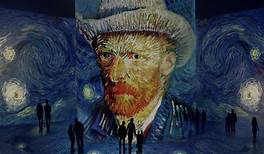 “What is done in love is done well.” – Vincent VAN GOGH: THE PASSIONATE PAINTER

VAN GOGH: THE PASSIONATE PAINTER is One of the most commendable names in the world of Western art . However He was a Dutch post-Impressionist painter who earned colossal fame posthumously . He is regarded today as one of the most influential and most talked about figures in western art history. His body of work includes nearly 2100 artworks . Which includes approximately 860 oil paintings . Which are characterised by bold colours, contoured forms and dramatic impulsive and expressive brushwork . His artworks contributed to the foundation of Modern art.

VAN GOGH: THE PASSIONATE PAINTER art earned outstanding popularity and fame after his death, especially in the late 20th century. His works sold for record-breaking sums at auctions all around the world. However, in his lifetime, he was not commercially successful . In addition he struggled with severe depression and poverty . However this led to his untimely and tragic death at the age of thirty-seven.

Vincent Willem Van Gogh the passionate painter was the eldest of six children . He was born and reared in a small village in the Brabant region of Southern Netherlands. He was a quiet self-contained boy who spent his free time wandering the countryside to observe nature.  His interest in art began at a young age , encouraged by his mother. However He was sent to the middle school in Tilburg and art was taught by Constant Cornelis Huijsmans, . Who had been a successful artist in Paris.

However, Vincent was not happy there and his profound unhappiness perhaps overshadowed the lessons . In July 1869 Van Gogh’s uncle Cent obtained a position for him at the art dealers Goupil and Cie in Hague. He was transferred to Goupil’s London branch in 1873. This was a happy time for Van Gogh and was perhaps, the best year of Vincent’s life. He was infatuated with his landlady’s daughter Eugenie but her rejection made him isolated at heart and religiously fervent.

Van Gogh started painting with watercolour while he was at school . Unfortunately only a few have stood the test of time, though the authorship of some has been challenged. When he took up art as an adult, he began at an elementary level. Early in his career, he experimented with lighting in his studio using variable shutters and different drawing materials. Van Gogh worked on single figures which were highly elaborate studies in black and white for some time .

From early 1883 he started working on multi-figure compositions and some time later turned to oil painting. Van Gogh came to believe that the effects of colour went beyond the descriptive . According to VAN GOGH: THE PASSIONATE PAINTER “Colour expresses something in itself”. According to Hughes, Gogh perceived colour as having a “Psychological and moral weight”. Yellow colour meant the most to him because according to him, it symbolised emotional truth. He used yellow as a symbol for sunlight, life and God. Some of his masterpieces include:-

Fifthly , The Cafe Terrace at Night,

Above all ,The Tree Roots..